Why is it called Navy Bean soup?

The small, white, and economical Pea Bean or Haricot provided a very filling, and nutritious protein during times of food rationing.  Over time the pea beans also came to be widely known as  Navy Beans because they were such a staple in the U.S. Naval diet during the second half of the 19th Century. The Navy’s original soup was called Bean Soup and this soup was served regularly to Navy members during World War II. Their original recipe called for the use of ham stock instead of chicken broth. A recipe for Ham Stock is included below. 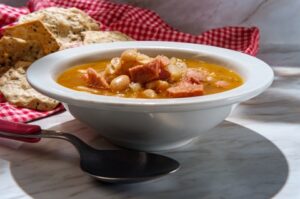 Other Recommended Ingredients to use if you are not using ham stock:

If Cooking for Two: Freeze serving-size portions to enjoy later.

Sauté vegetables in a tablespoon of olive oil or butter for a few minutes in a big stock pot. Then add water, salt, pepper, and ham hocks bring to a boil then reduce the heat so that the mixture can simmer. Stir occasionally allowing the stock to reduce down and become concentrated in flavor over 3 hours. Then strain the stock. Remove the ham hocks or ham bones. Remove meat from the bone; Cut meat into bite-sized pieces; Reserve the meat to be added to soup once the soup is nearly finished.