Yes! We’ve officially arrived to the Spring Equinox in the Pacific Northwest. The long grey winter is finally over and humans, creatures, plants and trees can rejoice due to longer days, warmer weather and the ever elusive big bright glowing ball in the sky to avail itself more often!

One of the loveliest things included in the changing weather is petrichor. What is that, you may ask?! Poems and songs have been written about this magical phenomenon. Petrichor is what is described as the smell of raindrops as they hit the dry earth. Fragrance creators have tried to duplicate this intoxicating smell for decades but it’s hard to bottle up! That special smell is created when water droplets (aka RAIN) hit the ground. Ozone in the rain mix with a bacteria in the soil called geosmin which is released. Plants also produce compounds that accumulate between rocks and in the soil which add to the earthy smell. 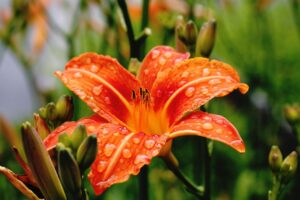 As we continue on with beautiful weather, go outside and breath deeply on those days when we get to experience the magic of petrichor!

Your Home is in a Trust, WHY THAT MATTERS! “Give Back” Referral Rewards April 2021