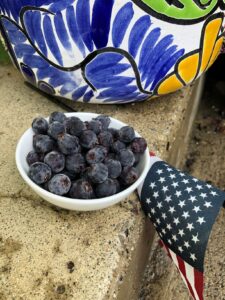 Ever heard of a saskatoon berry?

Ya, me neither until recently. Sort of looks like a blueberry but a little more hardy. They are native to North America and ripen in late June into July, can grow in just about any terrain, and aren’t especially picky about soil conditions. They have lots of fun names depending on which region they grow in such as prairie berry, serviceberry, shadbush, juneberry, or pigeon berry. Saskatoon is reportedly an anglicized word from the Cree language and was called misakwatomina which means “the fruit of the tree of many branches”.  These berries are high in fiber, vitamin C, copper, carotene, magnesium, manganese, calcium, potassium, and iron. I will admit, when I found out they were dried and used in pemmican, it made the old West cowgirl nerd in me think these are pretty cool berries!

I did pick up a container at the local farmers market and didn’t use them in pemmican, but baked them in muffins instead of blueberries and also topped on ice cream. They are quite delicious with little seeds that almost have a mild almond flavor. I’m definitely a fan now that I know about these little gems.

Have a berry great day!